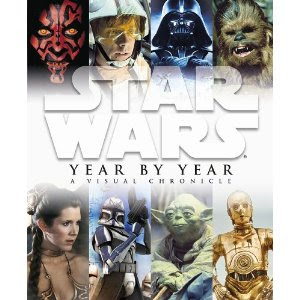 When I was at Comic-Con in July, I attended the DK Publishing panel where the authors and contributors of Star Wars Year By Year discussed their roles in putting together this chronicle of all things Star Wars. It was actually a pretty interesting panel and brought back some fond memories of my Star Wars-filled childhood, but the best part was that I won a free copy of the book!

Honestly, I didn’t know anything about the book going in and the way they described it made it sound like it was similar to DK’s other Star Wars contributions like the Incredible Cross-sections and so forth. However, the book came in the mail today and as soon as I picked it up, I knew it was going to be more than I expected.

The book weighs like 5 lbs and retails at $50 (both of which were surprises to me), but I was really shocked when I opened it up and began to grasp the amazing level of detail. There are just a ton of fantastic photos and tidbits of information. It really is incredible. It definitely made me chuckle a few times as I thought back on some of the toys I had, games I played, or books I read as I grew up.

I haven’t had a chance to really go through it, but I can’t wait to dig in. The one that I already know for sure is that it’s going to make a great coffee table book. I’ve already decided that it holds an honorary spot where all my guests will be able to page through it.