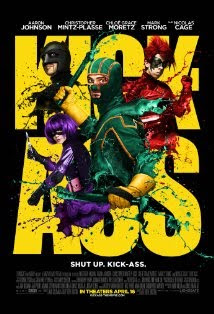 This weekend turned out to be a good one for catching up on movies. After finally seeing Moon on Friday night, I watched Kick-Ass on Saturday night and, honestly, I really enjoyed it. I was a little surprised at the brutality, but I really liked how the story was told and how it presented itself.

Most of the film revolves around a geeky teenager named Dave whose love for comic books leads him to don a costume and take on evil as the alter ego Kick-Ass. He’s really just a normal, likable guy and the whole superhero gig doesn’t go as well as planned and he gets in way over his head.

But it turns out that Kick-Ass isn’t the only superhero in town. Big Daddy and his 11-year-old daughter Hit Girl legitimately kick some serious bad guy ass in a very vicious and brutal manner. Hit Girl is one hell of a badass, which led to some outcry when the film was originally released in theaters.

I thought the film was well-done for the most part. It did take a little longer to get the story set up than I might have expected, but I even found that entertaining in its own way. I mean, who doesn’t love a good origin story, right?

Overall, I liked it, but not as much as Scott Pilgrim, another comic book adaption that was a whole lotta fun. It was a little heavy on the violence and a little light on humor for my taste, but I still enjoyed it quite a bit.Â The highlights of the movie were mostly the action scenes, but it did have a few good one-liners too.Â Not recommended for children or your mother.