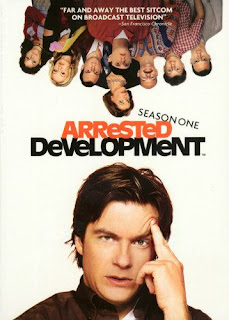 Earlier this summer a friend recommended that I check out Arrested Development. As it turns out Netflix has all three seasons available for streaming so it was an easy decision to add the first season to my queue and give it run. My friend insisted that it was very funny and I vaguely recalled that it was often labeled as “the best show you’re not watching,” but what I discovered was that Arrested Development is outrageously hilarious and perhaps the funniest show since Seinfeld.

Now for me, Seinfeld is the quintessential sitcom. It was hilarious when it originally aired and it is still hilarious years later. In fact, I find myself laughing loudly and frequently during episodes that I’ve seen literally a dozen times. Until I saw Arrested Development, I would say that The Office had been the only sitcom in recent history that I have found consistently funny and that even comes close to Seinfeld stature, though it doesn’t have the same rewatchability.

Arrested Development, for those who haven’t seen it, stars Jason Bateman as Michael Bluth, the one sensible individual living amongst a family of idiots. Sure, he has his moments of stupidity, but his fellow siblings and parents outshine him by far. The show has an amazing cast, including Michael Cera as George Michael Bluth, Will Arnett as Gob Bluth (pronounced like Job from the Bible), Portia de Rossi as Lindsay Bluth Funke, and David Cross as Tobias Funke among many other talented actors.Â The show is also narrated superbly by Ron Howard (which I didn’t realize until like a minute ago).

The first two seasons are pure comedic genius and the third is very funny as well, though I thought it wasn’t quite as funny as the first two. Overall, the show only ended up with 53 episodes before it was untimely canceled. I didn’t take long to watch the whole series and it was pretty disappointing to see it end, but there is some light on the horizon. A feature film is scheduled for release in 2012 and, according to imdb.com, will feature the full cast from the show. I’m definitely looking forward to the movie. I would love to see what the talented writers have come up with in the last few years.

If you haven’t watched the show and you like to laugh at all, check it out. Now. Seriously.