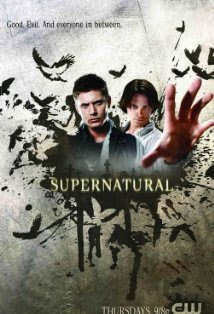 Over the course of the summer, I have been working my way through the first season of Supernatural and I just finished watching the final two episodes. When I first started watching the show, I wasn’t completely sold. There were a lot of horror elements that I just wasn’t that into, but as the season went on, I got more and more wrapped up in the characters and the underlying plot and found that as soon as I finished watching an episode, I was ready to watch the next.

The show definitely got better as the season progressed. In the pilot, we were presented with the backstory that frames the main plot for the entire season, but many of the early episodes didn’t focus too heavily on that story arch. Instead, they were one-shot, monster-of-the-week type episodes, somewhat reminiscent of the first season of Buffy. However, as the season progressed, the episodes became more and more engrossed in the central story line and just got better and better.

Probably the best part of the show for me was the characters. Sam and Dean are two brothers that have a lot in common, but have pretty different personalities. They have a great chemistry, aÂ camaraderieÂ that only brothers can share. But then, they really had to be perfect in order for the show to work. Sam and Dean are the only characters to appear in every episode so if the chemistry was off or one of the actors wasn’t great, then it would have been very easy for the show to have failed early on.

Another thing that I really liked was how the show was geared around the concept of family. Sam and Dean are fiercely loyal to one another. They have very different relationships with their father, but it is clear that no matter what happens, they love each other and will stop at nothing to keep their family together. Family really is the primary theme throughout the show and it worked really well as a backbone to the plot.

Despite the macabre elements, the show had enough lighthearted moments to take the edge off and gave me a few good laughs. I also liked the use of classic rock. I’m pretty sure that every episode featured at least one classic song. I’m a big classic rock fan so I was always eager to listen for the song and find out what they decided to use. Sometimes, the song was very fitting and would be played at a critical moment (Don’t Fear the Reaper comes to mind), but often, they would just sneak in a song while Sam and Dean were driving.

Overall, I really enjoyed season one and I can’t wait to start in on season two. The finale ended with quite the cliffhanger and I’m dying to find out what is going to happen next.

Honestly, I would recommend this show for anyone, but especially fans of the paranormal or horror, or fans of Buffy or Angel. The first season definitely had a lot in common with those shows, so if you liked either of them, I think there is a good bet that you would like Supernatural as well.